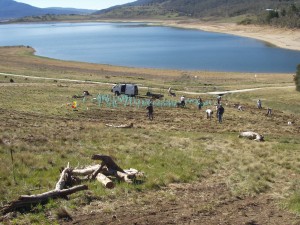 East Jindabyne was established as a village in the mid 1960’s and the Jindabyne East Residents Committee was established in the early 1980’s to form a common voice to deal with development related issues and to undertake environmental improvements within the village. Over it’s thirty year history it has undertaken substantial tree planting programs, constructed shared bike and walking paths and undertaken a major environmental restoration project along the foreshore and along a 2.5 kilometre section of Rushes Creek. The committee organises regular cleanups of roadsides and the foreshore in the locality. Maintenance and improvements to the shared pathway projects.

The environmental restoration project was begun in 2006 with a grant from the NSW Environmental Trust. It started with an extensive willow and poplar removal program along Rushes Creek and the planting of over 1500 native trees, shrubs and groundcovers in the project area which includes the lake foreshore areas from Rushes Point southwards  .

The East Jindabyne restoration project was conducted in cooperation and assistance of Snowy River Shire Council, Snowy Hydro Limited and the NSW Catchment Management Authority (now LLS) and more recently under the umbrella of the Upper Snowy Landcare Committee.

Completing the Upper Rushes Creek project which involves follow-up weed tree treatment and planting of 100 trees in the areas where poplars and willows were removed. Also underway are maintenance days and replacement planting in the Rushes Point and foreshore areas.